This post describes a way to make multi-color (multi-material / multi-extruder) objects in OpenSCAD suitable for 3D printing with a Prusa i3 MK3 MMU2. It assumes basic familiarity with OpenSCAD, Slic3r, and using the Prusa MK3. The snowman ornament shown here (thingiverse:3319509) was designed alongside with my five-year-old son and then I used it to experiment with this approach to generate a multi-color ornament.

OpenSCAD allows you design and specify 3D models in a programming language, and allows you to output one part at a time (such as into an STL or AMF file). Slic3r Prusa Edition is a slicer used to do multi-color printing for the Prusa i3 MK3 MMU2. It can import either a multi-part AMF file or can load in a set of STL files, one for each color/extruder.

While OpenSCAD has support for applying colors to elements within an object, it wasn't immediately clear how to leverage this to print a multi-color object. OpenSCAD issue 1608 aims to add some more direct support, but it isn't resolved.

The approach that I've taken here is define and embed a "multicolor()" operator in the OpenSCAD object design which changes its behavior based on a global variable. I then export three separate STL files, one per color, and then import these together into Slic3r.

The full OpenSCAD file for the snowman are available here, and I scaled this down by 60% before printing.

For example, here is a rendering of the multi-color object in OpenSCAD: 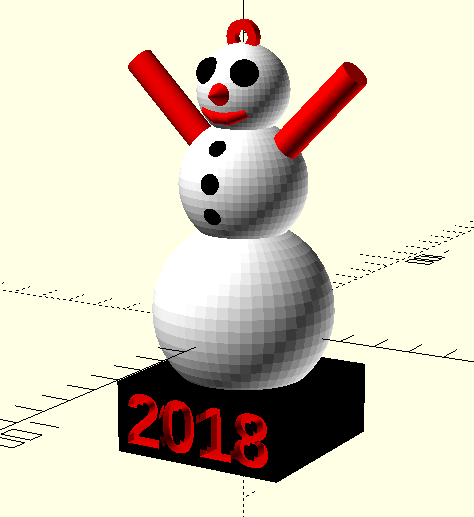 I use this function to define a "multicolor" module:

This can then be used to allow different additive solids to be rendered in different colors. As a very basic use-case:

Which when rendered with current_color = "ALL"; results in a multi-color object: 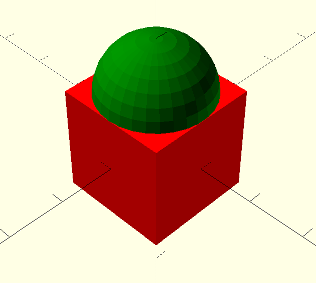 In this above case, you could switch to each of current_color = "red"; and current_color = "green"; one at a time, and then for each do a Design->Render (F6) followed by an export (File->Export->Export as STL) as two separate files.

This module works by only applying a color and rendering the children when current_color is "ALL" or when it equals the color passed to multicolor(). Otherwise it ignores the tree of elements underneath.

Note that this approach relies on Slic3r being OK with overlapping parts within an object. It has an ordering such that parts higher in the list take precedence over parts lower in the list for an object.

Once the object is designed, for each color:

For example, with the snowman example above here is what just red looks like when rendered: 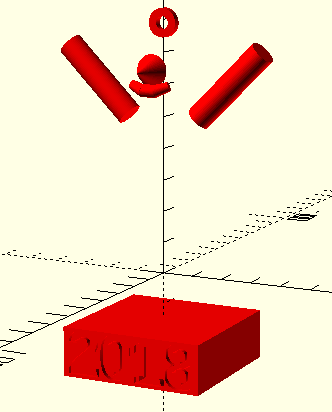 I found it helpful to export the parts with filenames that can be sorted in the order of the desired extruders. For example with the snowman I might export out three separate STLs with:

This is because I wanted black and red to have precedence over white when I load the parts into Slic3r.

Once you have STL exports, you'll want to import them into Slic3r to get them ready to print. Some initial steps:

Once the object is loaded and positioned and scaled, double click on the loaded object. This should open a panel like this: 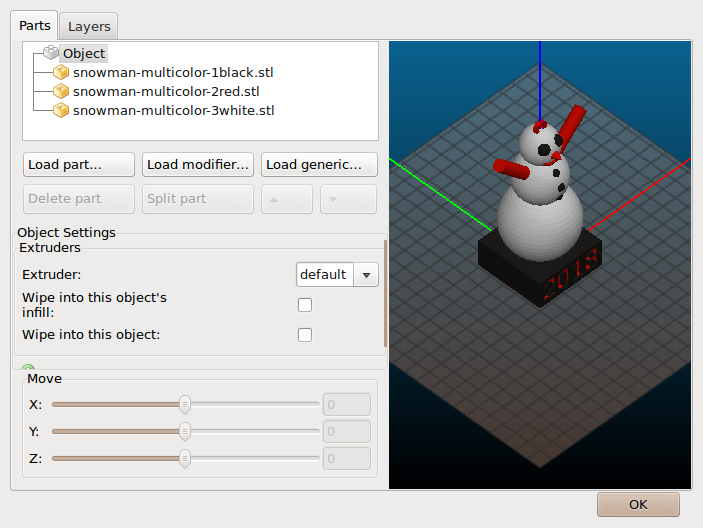 For each part confirm you have the correct extruder selected. Also make sure the parts are listed in the correct order, using the up and down arrow buttons if you need to move the parts. Again, higher parts in the list take precedence when there is overlap.

Next double-check you've selected the right type of filament (eg, PLA or PET) and then slice. When you go and preview, you should be able to see the object in the various colors (and if you scroll through object layers you can confirm what interior parts will be which colors. For example, this is what the full sliced object looks like: 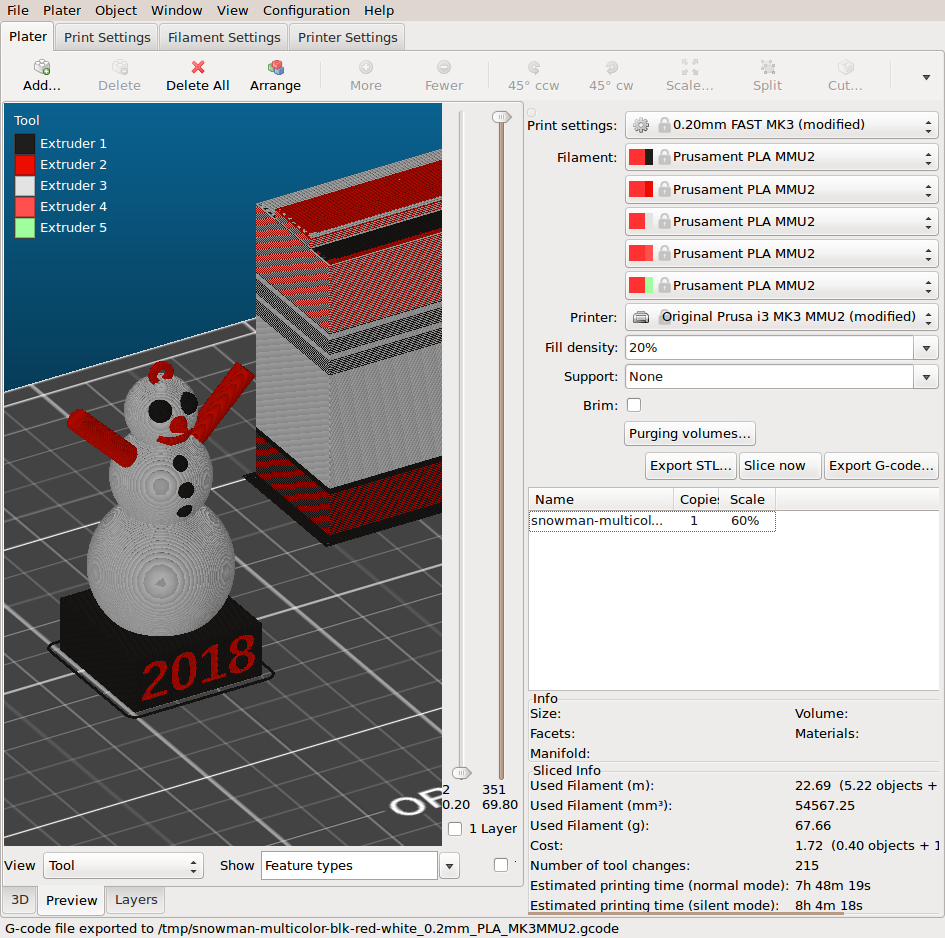 And this is what the an area with multiple colors in a single layer looks like when adjusting to show the cross-section.

(Side-note: I love using the gyroid infill for many reasons, but it really does look a little like brains in the cross-section of heads --- and I learned the hard way that it thus looks way to creepy when used in translucent colors for figurine toys.)

Finally, make sure you load the filaments into the correct extruder order for the printer. I've sometimes found it helps to even include the color order in the gcode filename so I don't forget.

Then run your print. I've unfortunately had bad luck getting the MMU2 to successfully complete prints.

The more tool changes (ie, switching between colors on a layer), the more chances of failure. For example, my first attempt to print this ornament had the red fail to load for the top layers in a way that wasn't detected by the filament sensors. I've also found poorly wound filament to also be more likely to jam and result in failures with the MMU2 than without it. I've also had adhesion failures with the purge tower cause failed prints, to make sure its first layer is laid down well and restart the print if it doesn't look like this happened. 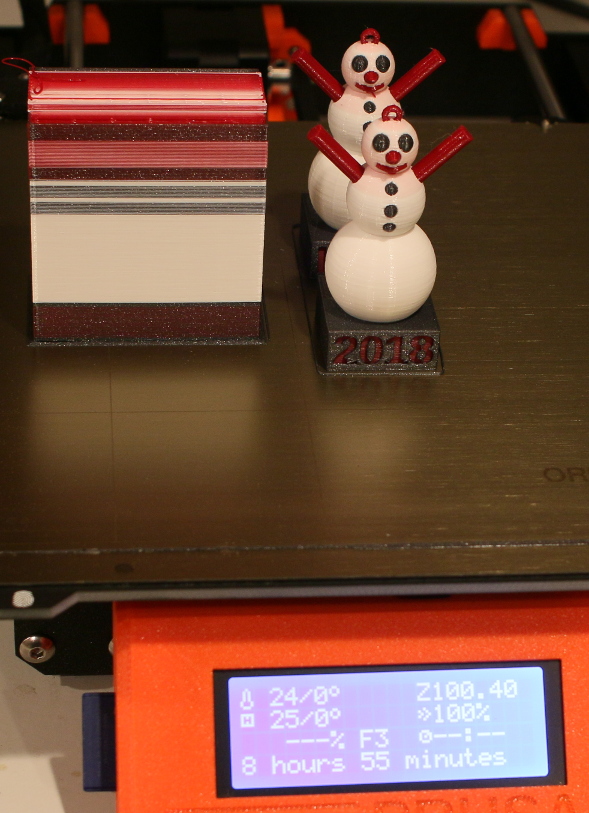 Some other design hints from my experimenting with designing for multi-color printing:

Here is the end-result of the snowman ornament hanging in our tree! 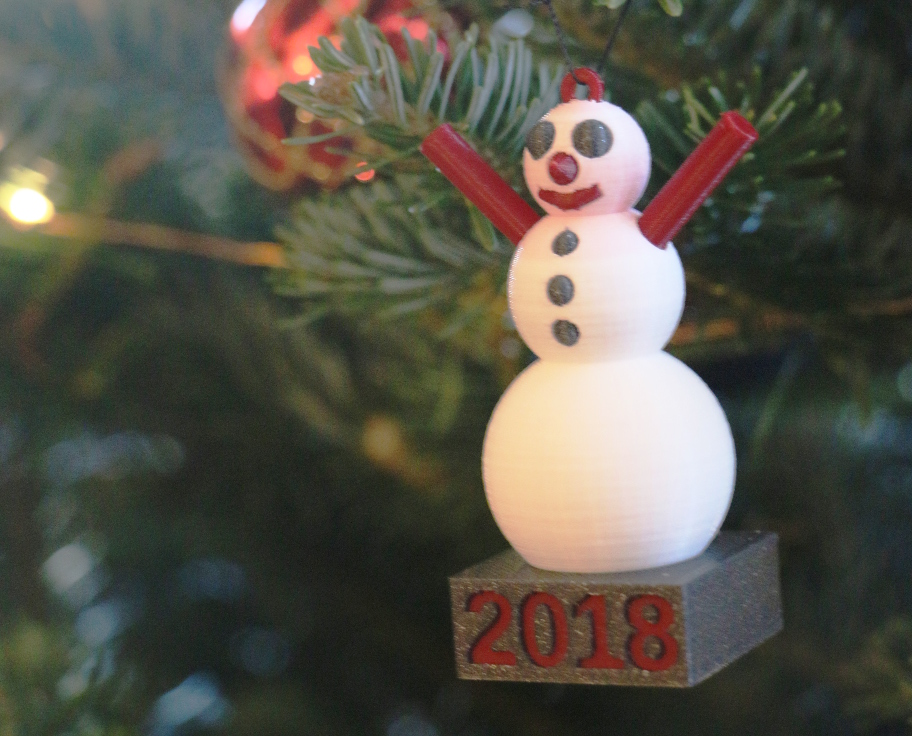 Soon to come: a blog post on how to use this technique to design and print a multi-color puzzle.